Looks like winter might be here to stay … hard to believe today was a snow day for the Simcoe County District School Board!

In other words, the stronger you are the less likely you are to have high blood pressure, high cholesterol, extra weight around the abdomen and  less risk for diabetes.

Today’s Strength Focus
3 sets of each: 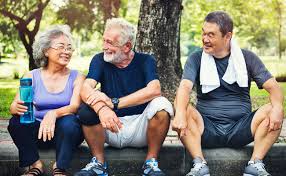 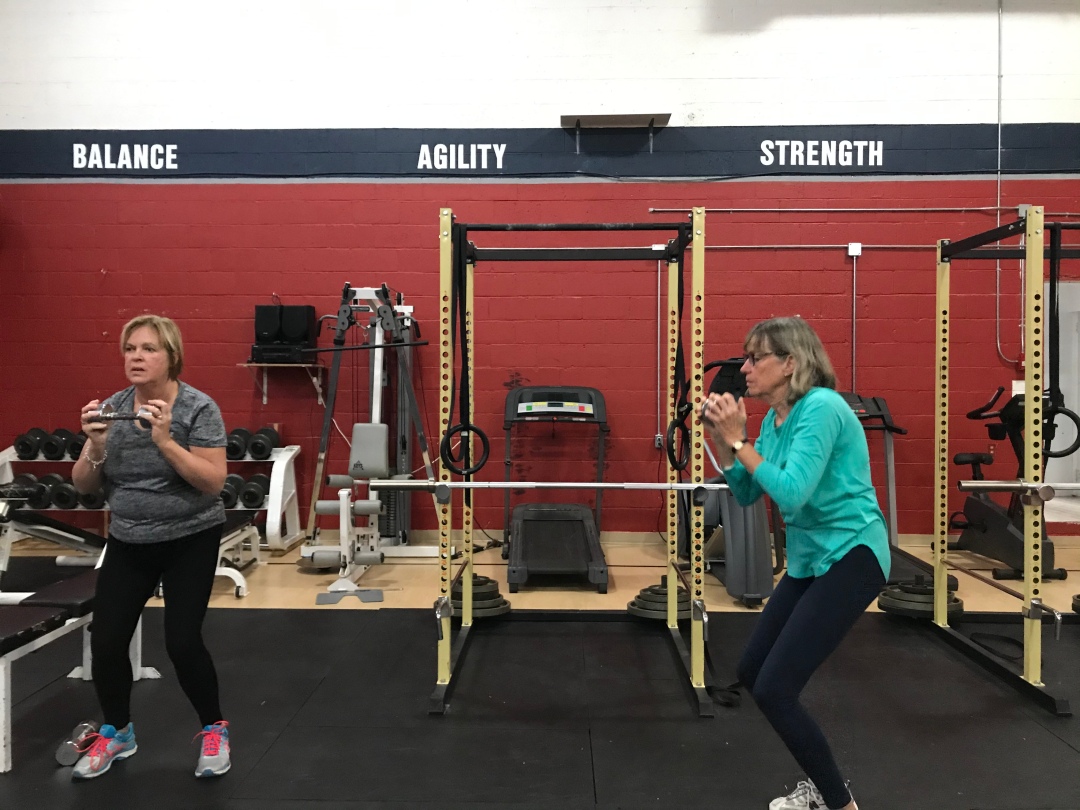 Conditioning Workout
Working for 12 minutes, increase reps of KB swing and squats by 2 every round. Rest as needed. 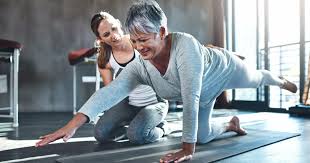 A personal trainer can help teach you how to work out safely.

One of the most frustrating things about getting older is when the pounds pile up along with the years. Keeping weight off can be a challenge, even when you aren’t eating more or exercising less. But don’t be discouraged.

One big reason we gain weight as we get older is because we gradually lose muscle mass, about one percent every year, says Donald D. Hensrud, associate professor of preventive medicine and nutrition at the Mayo Clinic College of Medicine. This causes a decrease in our basal metabolic rate — the process of burning calories while we are at rest. The lower the metabolic rate, the fewer calories we burn.

“In general, the average 80-year-old will move less in small and big ways throughout the day compared to the average 20- year- old,” Hensrud says. “And exercise, separate from daily activity, probably declines, although that only affects in a large way the smaller proportion of people who exercise regularly.”

Dietitian Jessica Murgueytio agrees. “Many of my patients admit to moving less overall as they get older, and the first thing I recommend for weight loss is to add weight training — at least two to three days per week — to slow down sarcopenia ( age- related muscle loss), along with an additional day or two of cardiovascular exercise,” she said.

She suggests working with a personal trainer, especially on weights, to learn to lift safely and effectively.

“On top of this, I encourage my patients to meet the 10,000 steps per day goal, so they are taking walks throughout the day or doing house or yard work versus getting home from the gym and sitting all day,” she said. “This will also impact metabolic rate.”

Changes in hormones — declines in testosterone in men and declines in estrogen and progesterone in women — also can affect weight.

But it’s a false assumption that post- menopausal women gain more weight than men, Hensrud says. Rather, both sexes gain, but weight tends to redistribute in women more quickly than in men, often ending up in the abdomen — one reason for this misperception.

“Weight gain seems to affect men and women similarly,” he says, typically about a pound or more annually, often between Thanksgiving and New Year’s.

“This doesn’t seem like much, but on a population- wide basis it adds up to quite a bit,” he says. “It is cumulative. It stays on. So, after 20 or 30 years, it adds up. During menopause, weight gain ( in men and women) is about the same. But (in women) weight shifts more toward the abdominal region, so it appears to be greater weight gain. The same thing happens in men — greater weight gain with age in the abdominal region — but it occurs more gradually.”

There also may be physiological influences at work. A recent study suggests that lipid turnover in adipose tissue (where the body stores fat) decreases during the aging process, meaning the removal of fat from fat cells slows down, contributing to weight gain.

Researchers studied the fat cells in 54 men and women during a 13- year span, and all of them showed declines in their rate of lipid turnover. The results indicate that processes in the fat tissue “regulate changes in body weight during aging in a way that is independent of other factors,” says Peter Arner of the Karolinska Institute in Sweden and one of the study’s main authors, along with collaborators from Uppsala University in Sweden and University of Lyon in France.

“( HIIT) has also been shown to help lose abdominal fat,” he says. “Moving throughout the day instead of sitting can also help burn a relatively large amount of calories.”

Murgueytio warns that if exercise and muscle mass wane, it’s important to compensate by cutting calories.

“I encourage my patients to work on portion control and eating a higher volume of lower calorie foods, like fresh fruits and vegetables, since they will fill us up with less total calories and are important for aging, vitality and disease prevention,” she says.

The good news is that weight gain seems to stabilize after the mid- 60s, in part because people often eat less when they get older, Hensrud says.

“Although physical activity probably continues to decline throughout the life span, energy (calorie) intake also tends to decline in the elderly,” he says.

Some of you may have seen this news story last week on CBC.  It is a great story that reminds us that it is never too late to change our health status and start an exercise program.  Exercise really is wonderful medication and it is amazing how our body responds despite how old we may be! 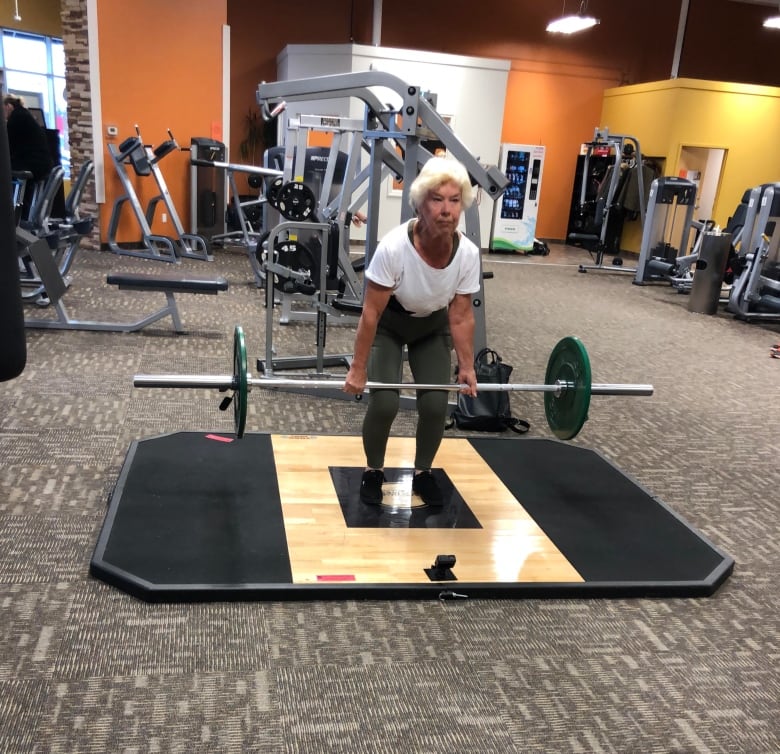 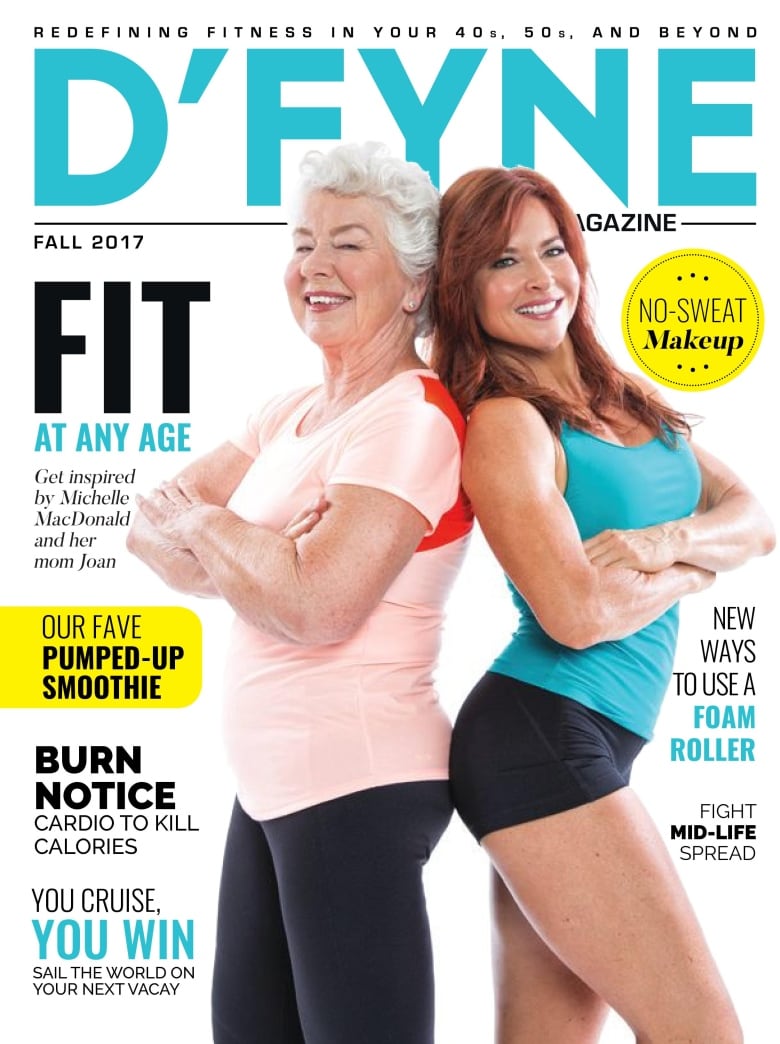 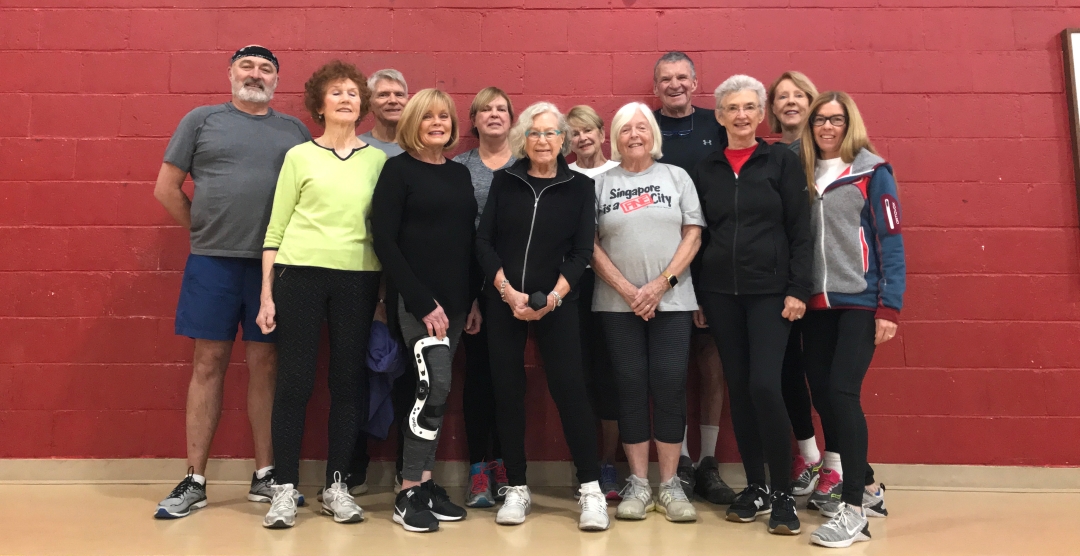 “As soon as you feel too old to do a thing, do it!” – Margret Deland

Strength Focus
Complete 4 sets of each, alternate between each exercise
A) Push ups  5 reps
B) DB row  8 reps each arm